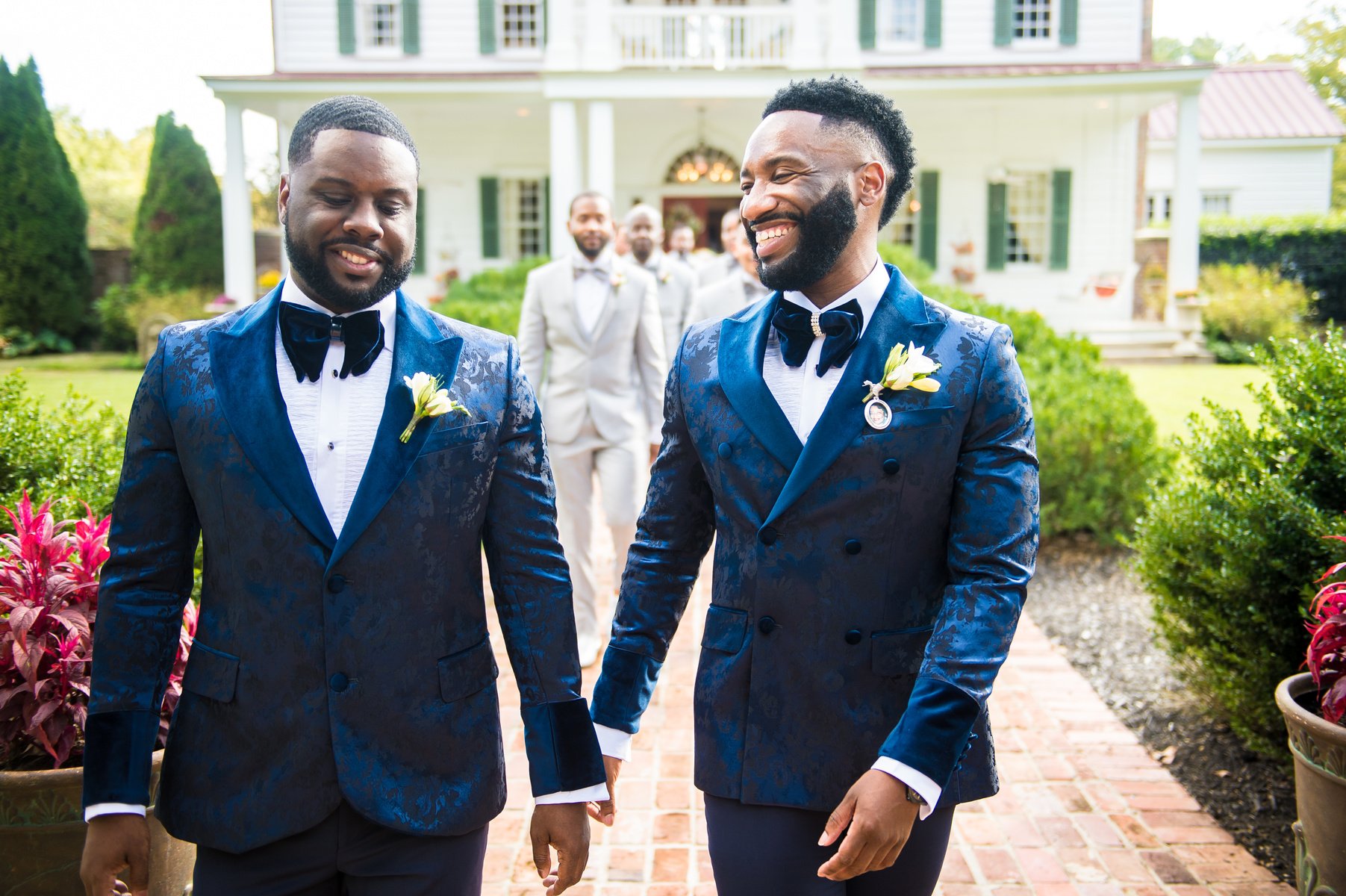 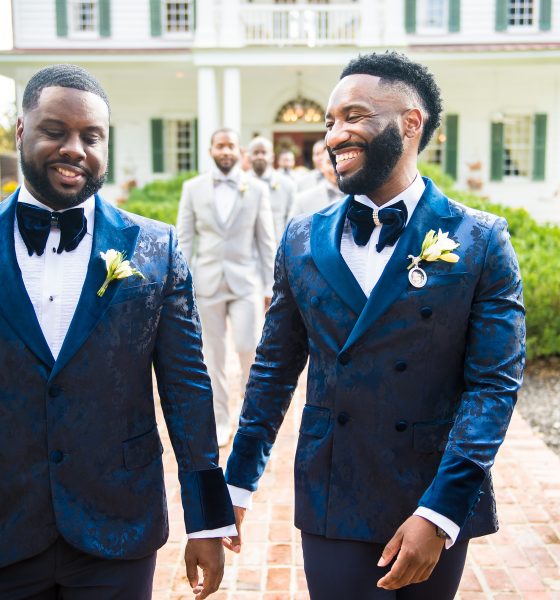 I had the honor of seeing two queer Black men get married and it changed my life. September 30th outside of Memphis, TN I was present during a wedding that was unlike most of the weddings I was forced to go to when I was a child. I’m not the biggest fan of dressing up but dealing with two men who would give any TLC Bridezilla a run for their money, I had no choice.

This couple is no ordinary couple. Over the years I’ve become close with them as they have shared so much wisdom with me on what it is being a Black queer man and in a committed relationship. I’ve often talked about the lack of representation on TV and in real life when it comes to seeing Black gay men in love. I didn’t think it was possible because of this. I thought to myself several times “I don’t see Black men together so it must not be meant to be.” Seeing the two share their vows sparked something in me that I was sure was there.

I think about 14 or 16-year-old Justin and what the effect would’ve been on him if he saw Black Gay love in real life. Shows like “Noah’s Arc” gave some glimpse but was still TV.

Even ‘Noah’s Arc’ wasn’t enough to combat the homophobic content that young me saw. I always asked myself was it something wrong with me and was it truly an abomination to attracted towards the same sex. Was I sick and twisted as my pastor told me almost every Sunday? No, I wasn’t. This Sunday would be different. This Sunday 31-year-old Justin would see two of his friends who are in love celebrate with friends and family and won’t be judged. A Sunday that I would always remember.

This is no ordinary love, and this is no ordinary couple. I met Erik at a time in my life when I was unsure about what I wanted to do, and I felt I had no choice because capitalism was on my neck. Erik reached out to me to express that he enjoyed my YouTube recaps of Real Housewives of Atlanta, and a friendship was born. He offered me a job opportunity when I really needed one, and he was a part of the catalyst that lead to the creation of KingofReads.com. He supported me (in more ways than I can share) with my move to Atlanta, and I will forever be grateful. Over the years I’ve become close with them, and they have shared so much wisdom with me about being Black queer men, choosing to be in a committed relationship. I am happy to have them in my life, and I am especially happy to have been able to share their special day with them. Seeing this couple share their vows in front of family and friends sparked something in me – Black queer love is possible. How revolutionary. 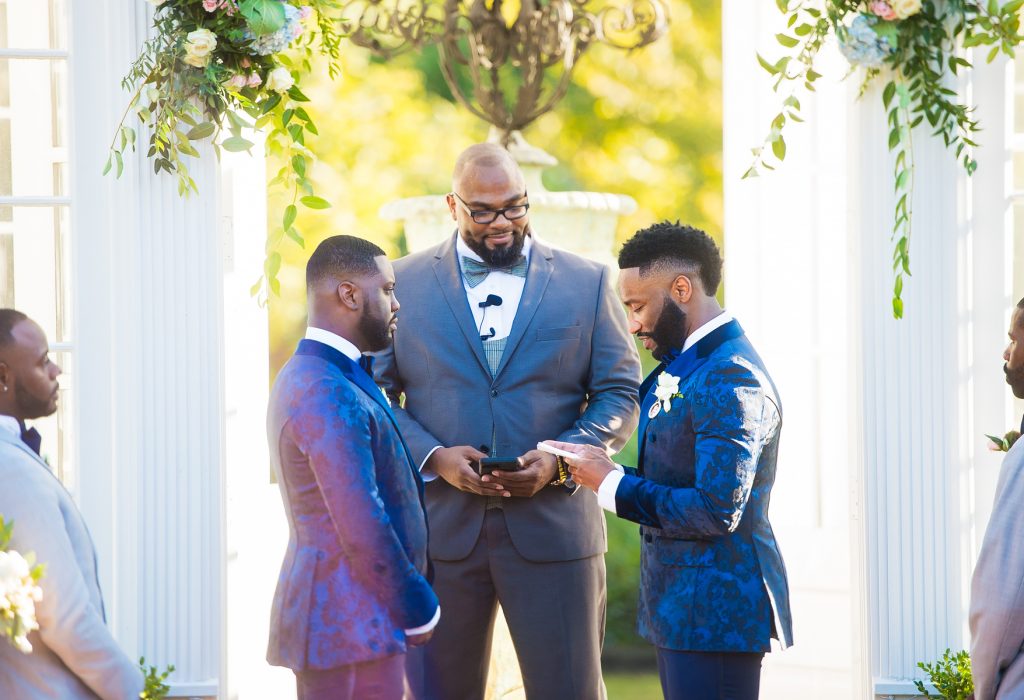 So seeing these two Black men come together wasn’t just important to me because of the ceremony but it was love they shared with each other that I have been fortunate to witness and it changed me. On September 30th, outside of Memphis, Tennessee, right in the heart of the Bible belt, their wedding ceremony began promptly at 5 pm. I’ve always seen photos from same-sex ceremonies but never attended or thought it was possible to even think I would have a chance at one. This wedding celebrated the love of two men who looked like me and loved like me. Although I’m not the biggest fan of dressing up, I put on my Sunday’s best – honestly, I had no interest in catching the wrath of two men who would rival any WE TV Bridezilla. Days before the ceremony I played dress up from head to toe. Terrell insisted and even went as far to purchase more shoes because the ones I had just wouldn’t do. You gotta love them. I walked in right as the ceremony began and I felt an instant rush in my blood that this was real. Not a viral video on social media but I was actually there.

I cried. Tears of joy. I was moved. As someone who made a decision earlier this year to leave monogamy alone and just have “fun” and focus on my career this told me that sometimes love truly does happen when you least expect it. At that moment I realized that I loved and appreciated my friends for inviting me to experience an important moment in their lives. I also came to realize that I, in fact, am deserving a love and for someone to make me loved. Love takes work no doubt it isn’t what we some might want us to see on Instagram or Facebook. There are moments when things might seem too much to get out of and those are the moments that show you rather the person in your life is truly the one for you or not.

I didn’t attend this wedding alone. I went with someone who I am in love with. If I hadn’t been for seeing the love between Erik & Terrell over the years I would’ve given up on love in general, but I feel like I’ve been given a second chance to truly open myself up to be prepared for whatever my heart deserves.

Check out some of the amazing photos taken by Uche Onyeyiri of Erik & Terrell and follow their Instagram.

Related Topics:Black Queer WeddingFeaturedLGBTQMarriage
Up Next

“Because of You We Know More…” Celebrates Past and Present Victims of HIV/AIDS.