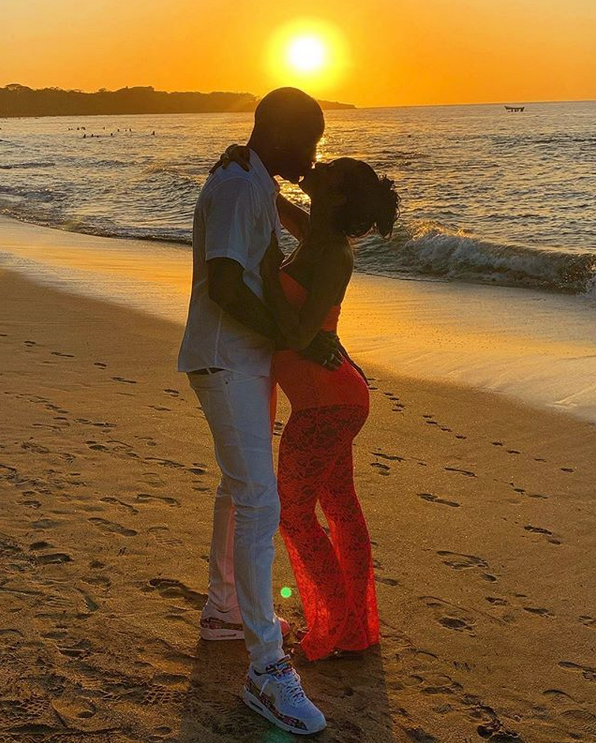 Following an elaborate proposal staged by Safaree, Erica Mena said yes and shared some huge news. The Love and Hip Hop cast mates might be expecting a child!

Love is in the air

Taking place at Erica’s Atlanta home, Safaree presented Erica with a 14-carat ring valued at $175,000. Employing 112 to serenade the couple with “Cupid”, Safaree’s surprise included 20,000 rose petals and 200 candles. Appearing to take place in her living room, the R&B group performed with a full band, stopping just before Safaree dropped to one knee. Erica, of course, happily accepted.

Please if I’m dreaming don’t wake me up. ❤️??Fireworks in my backyard. @iamsafaree You have officially made me the luckiest woman in the world. I hope your ready for me to honor/respect and LOVE you like the true King you are. ❤️???

Safaree and Erica Mena began dating earlier in 2018, making their quick engagement a surprise. With many wondering what prompted their rush to the altar, suspicions arose that Erica may be pregnant. While the newly engaged couple have yet to dispel rumors, they are cashing in on the press. Rumors are now swirling that Safaree and Erica Mena may have a wedding special in the works. We just know Mona Scott is somewhere rubbing her hands like Birdman.

While many extended their congrats to the couple, it appears Erica’s ol’ thang may be a little jealous. Amid the pregnancy rumors, DJ Envy posted to Instagram, saying he wants baby number 6!

Back in 2013, DJ Envy had an affair with Erica Mena that caused extensive marital issues and ruined Gia Casey’s opportunity to join the case of RHONJ. Although the affair ended nearly 5 years ago, Erica Mena and DJ Envy still harbor resentment toward one another. In August during Nicki Minaj and Safaree’s twitter beef, Mena took shots at Envy for mentioning her periodically on The Breakfast Club. With an engagement, pregnancy rumors, and the prospect of a televised wedding, Erica won’t be phased by Envy’s subliminal jab.

Are you happy for Safaree and Erica Mena? Do you think Envy was being intentionally shady with his baby goals?

NeNe Leakes Gets Called Out for Being Jealous of Tanya 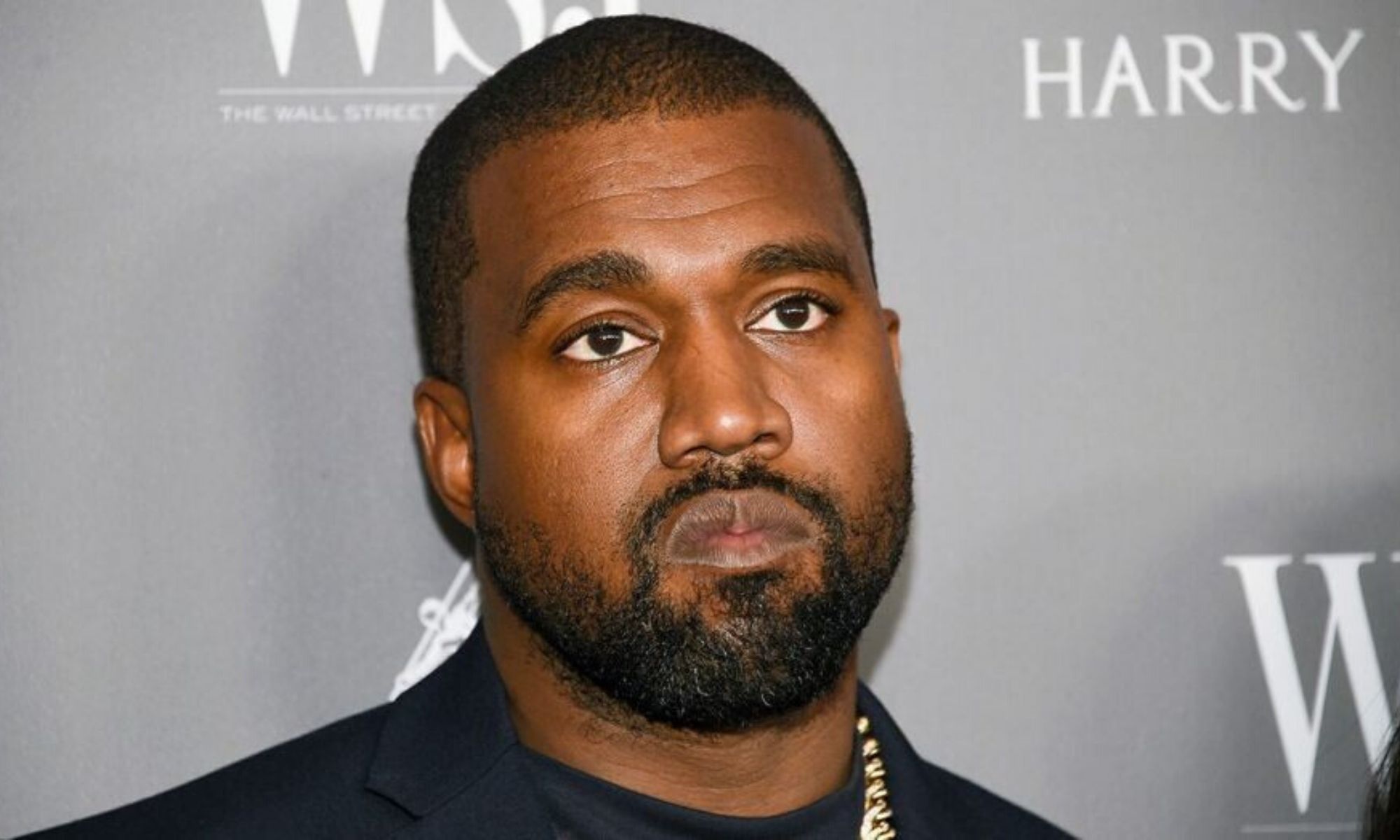 Disclaimer: This is the opinion of one young writer, and does not reflect the views and opinions of KingOfReads.com or its proprietor.

I’ve spent a lot of time with Kanye West’s music. I was born in 1994, so Kanye arrived on the scene at a time when I was a developing Queer boy. I had so many feelings, these uncontrollable hormonal emotions, that Kanye’s music really spoke to in some ways. That said, he was trash. Like most of our heroes, he was trash. But we ate it up, didn’t we? Now, some of us have outgrown him. Some of us need to grow up.

Kanye has, yet again, let his ego do the talking. Whether you believe he is serious or not, he wants us to believe that he is running for president. He also wants you to believe he loves Black people. It’s dangerous for you to believe either. Kanye has a non-Black wife, whom he has allowed to scold and threaten the Black people running the foundation named after his Black mother. Kanye was (is?) an ardent supporter of Donald Trump. Kanye implied that slavery was a choice. Kanye’s given you every indication that his interests lie with his current state of mind and y’all (spelled: Black cishet men) ignore the fact that said interests consistently cause harm. That makes you complicit. So let’s talk about it.

As JustLatasha once said, “I’m sorry your fathers never came home.” Kanye is not your long-lost Daddy. Neither is Nas, Jay-Z, J. Cole, or Robert Kelly. These men are businessmen. Their allegiance is to the money they make. Don’t get me wrong. I’m anti-capitalist, but I understand that Black people need money to survive, and in order to leverage capital for progress against oppressive systems. All these men have enough money to survive for several hundred years. Yet, instead of redistributing it or supporting the work of people who have been fighting toward Black liberation for decades, they sprinkle a few tax-deductible dollars into organizations that may or may not actually appropriate these funds correctly, or give you a soundbite that makes you think they’re on your side. Then, they turn around and say things like “we’ve moved past kneeling” and “400 years?! That sounds like a choice.” They spew rhetoric, not backed by facts or even well-thought-out opinion, that undermines people who have done the reading, who have done the research required to participate in the discussion. The problem is, at every turn, Black cishet men want to believe that they’re “playing chess not checkers” when it’s clear they aren’t even on the board.

Y’all have this faith in these men, as if they somehow are providing something substantive in your life. Let’s take a look at a few of the “chess” moves Kanye performed today. He told you vaccines were “the mark of the beast”. He said one of the police officers who aided in the murder of George Floyd didn’t deserve to be in jail. He implied that God was punishing us with COVID-19 and that prayer was all that was needed to stop it. But when he was asked about taxes, this man who’s worth more than some small countries said “I haven’t done enough research on that yet. I will research that with the strongest experts that serve God and come back with the best solution.” And the worst part is that he doesn’t have to answer for any of this. You’ll all do it for him. You’ll defend him until the day he dies because you see him as a patriarch, a father-figure, here to guide you through life in the way your father never could. Guess what, Tiger, daddy isn’t really out for a pack of smokes. He’s in Wyoming with his White wife and a whole lot of money he doesn’t want your dirty little fingers to touch.

Do you feel attacked? You should. Toyin is dead. Tony McDade is dead. Trans women are dying at such a rapid pace, I have lost track. George Floyd’s gasping death is still playing in my mind, and Breonna Taylor’s killers are still not answering for their crimes. These are our chess pieces. You, not Kanye, should be moving them, but your fingers are too preoccupied defending a man who doesn’t know you exist and never wanted to.

Floyd Mayweather, Mayweather Promotions May Not Be Doing So Well 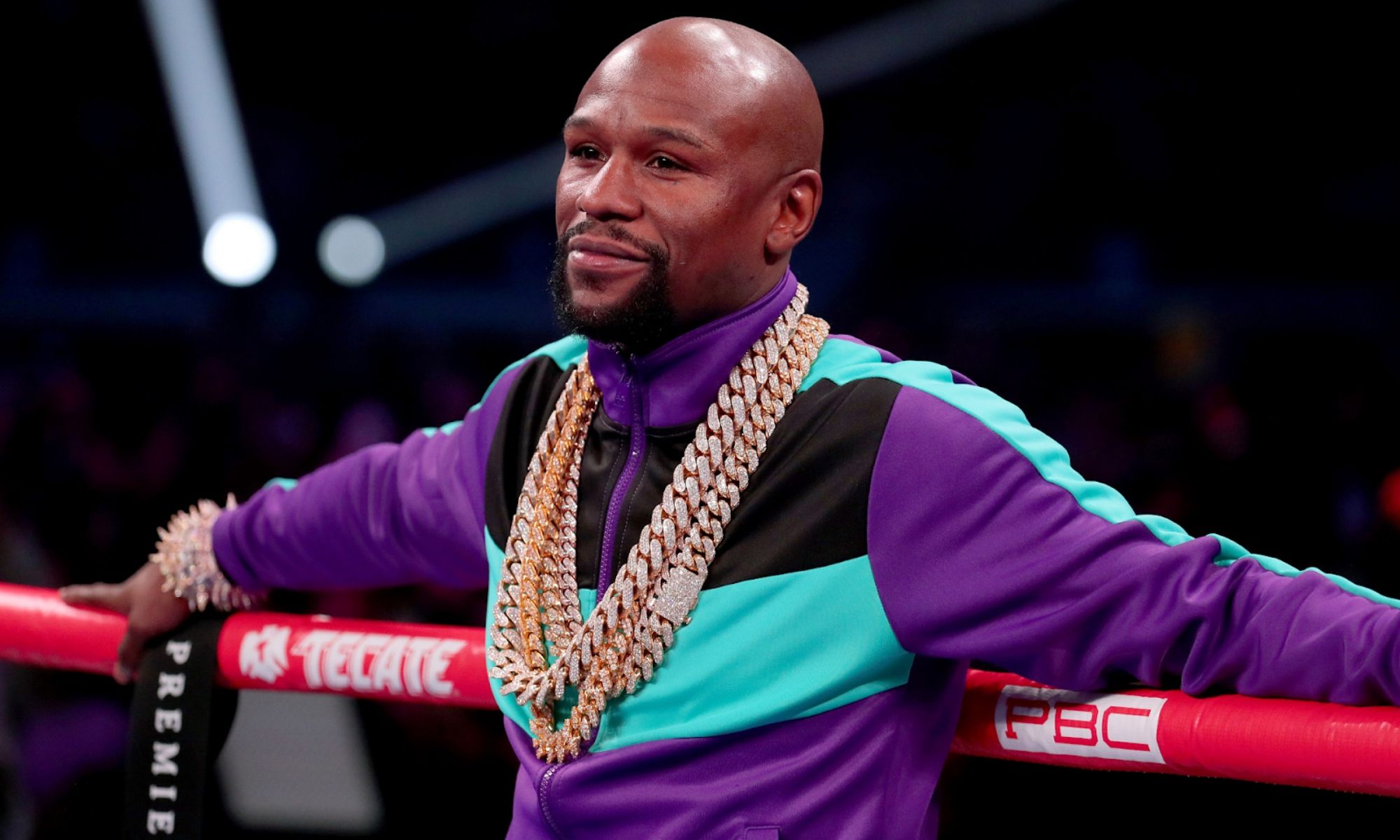 Serial woman-beater, boxer, and founder of Mayweather Promotions, Floyd Mayweather, may be in financial troubles right now according to many sources close to the athlete.

It was revealed Tuesday that Mayweather Promotions, the boxing promotional company named after and started by “Money Mayweather,” was among the many thousands of small businesses nationwide that applied for financial assistance through the Paycheck Protection Program.

Let’s quickly recap: the Paycheck Protection Program (PPP) is a federal loan program spawned from the economic impact of the COVID-19 pandemic on the country. Essentially, businesses of a certain size are eligible for a 100% forgivable loan if they continue to pay all their employees. Protecting the paycheck, right?

Via Instagram, Floyd joined the website, Cameo (think: “OnlyFans” for celebrities), and is charging folks the almost-$1k fee for custom messages. Pretty surprising for a guy who nicknamed himself “Money,” has been unabashedly vocal about his money, and frequently posts obscene pictures of himself posing with unbelievable amounts of cash.

During the coronavirus pandemic, more than 40 million Americans have applied for unemployment benefits with most receiving $600 or less per week. While many have worried where their next meal will come from, where their rent money will come from, Floyd has made business moves. Check out his recent posts to see what we mean.

While many Americans have been irrevocably f*cked by our good sis ‘Rona, Mayweather posted his closet.

But his company, Mayweather Promotions, can ask for federal assistance? FAFSA, but for businesses?

Kanye West Rambles Through an Interview About His Presidential Run 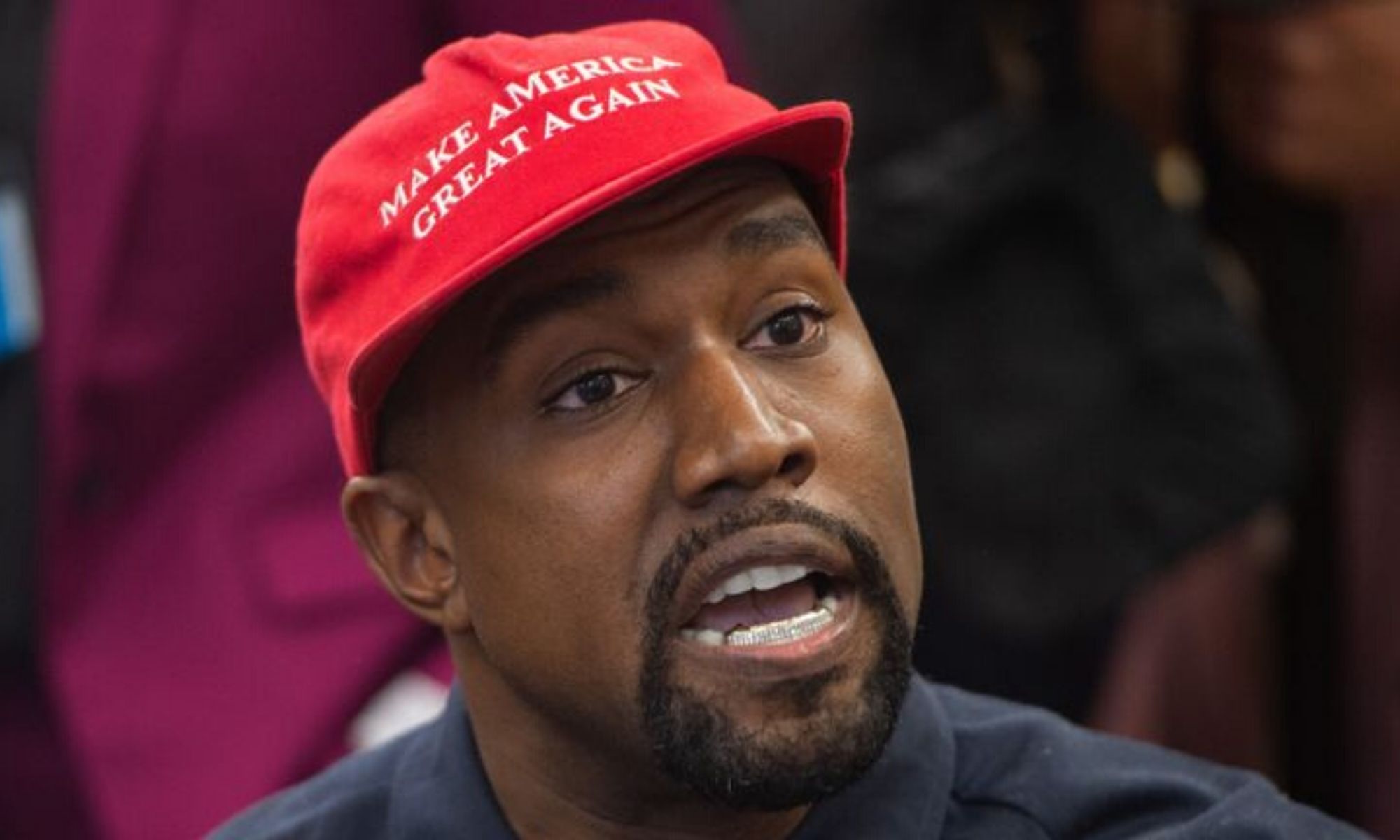 Kanye West’s Twitter announcement on Independence day confused a lot of people. There was no record of him registering to run, his only two endorsements seemed to be Kim Kardashian and Elon Musk, and… well… it’s July. It all just seemed like him trolling the masses again. Well, I guess Forbes’ Randall Lane wasn’t content to wait on further information, because they went ahead and called him up to ask him what’s tea. The results were a mixed, babbling bag.

The actual interview was 4-hours long and Forbes picked as much out as I’m sure their poor servers could handle, but the picture is still one of a man who is only clear that he is a Christian man. He claims that God is the one who chooses the president, that God needs to be let back into schools, and implies that COVID-19 is the result of us making God mad. “We pray. We pray for the freedom,” he said, “It’s all about God. We need to stop doing things that make God mad.”

He also seems rather paranoid, and even that is threaded through his religious views. On vaccines, seemingly as preventative care against coronavirus, he said “[t]hat’s the mark of the beast. They want to put chips inside of us, they want to do all kinds of things, to make it where we can’t cross the gates of heaven.”

There’s a lot to process here, but the gist is that Kanye is portraying himself as serious, but seems unable to give much in the way of answers that don’t relate back to God. We’ll let y’all know when he starts making sense.