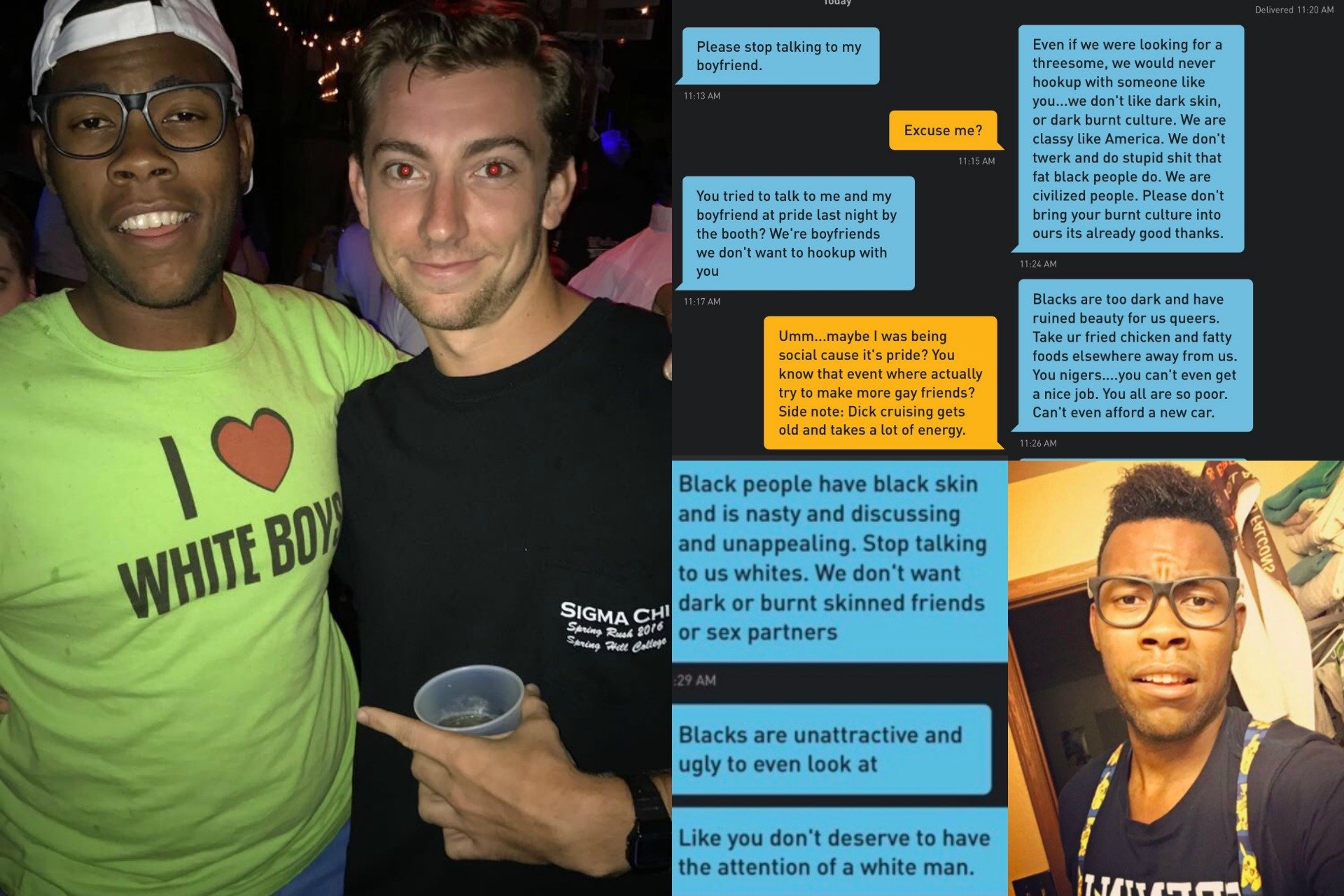 How you gone win when you ain’t right within?

That’s the response I have for black gay men who only date white men and get mad when it’s then reversed on them. Recently a black gay man shared his experience when he received some hurtful messages on Grindr (a Gay Dating app) during Pride. You already know what Pride this was 🙂

The screenshots have now gone viral, and everyone feels awful that he has experienced racism from a community of which he is a part of. The White Gays denounced it so you know it was real.

I don’t care, and I will never will. This ginger pube hair sniffing individual experienced a much-needed wake-up call.

Take a look at the screenshots first. 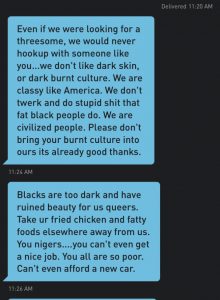 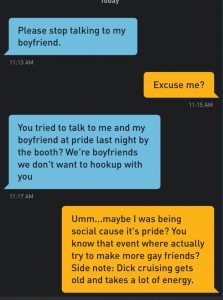 Tried being cordial and friendly with a white gay couple at Toledo pride yesterday. These are the messages I get the day after. ? pic.twitter.com/AhFBByPVuy

Now, one would think that he was experiencing what many of us black gay men have experienced when showing interest in a white man, but unlike this self-loathing coon, we don’t chase them. 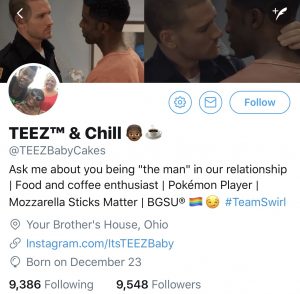 Don’t trust any black gay who has “#TeamSwirl” in their bio and who also has a picture of an interracial couple that isn’t them posted as their header. Who does that? Self-loathing coons do. They do it all the time. Let me first say this, “I’m not opposed to interracial relationships if you truly love who you love.” This is a man who doesn’t. A man who doesn’t have a problem stating that he is only interested in dating white men until they call him a n*gger.

Let’s talk about preference for a quick second. You say preference, I say many use that as a disguise. You can try to disguise it as a preference, but it smells and tastes like unseasoned internalized racism to me.

When you’re bitten by a White Walker sometimes you turn into one yourself.

Teez is not the only black gay men who think like this. There are many others, and he’s just the example right now. If you don’t see people who look like you as attractive, what does that say about you? All of what’s being said could be written off as complaints that aren’t based on any receipts, but I have them. 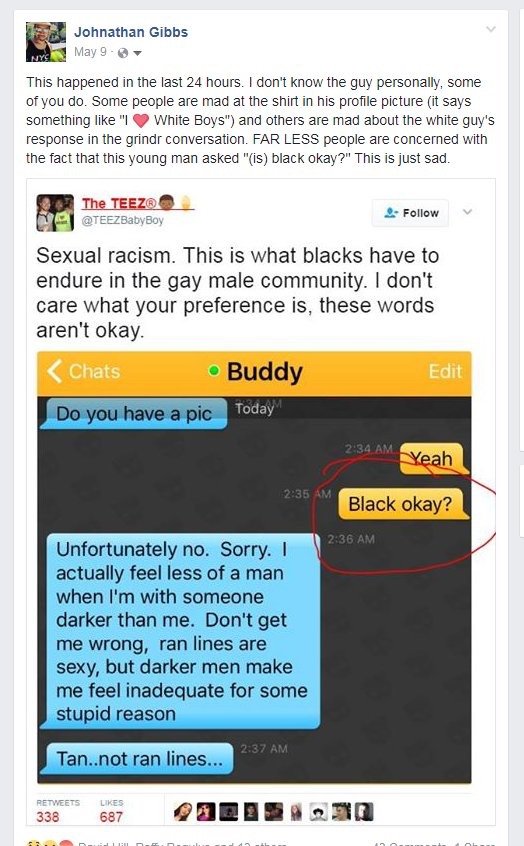 When you go looking for something, you find it. So the cries of this coon experiencing racism are just what he needed. He needs to know that the many white men he’s only attracted to don’t see him as their equal and will never be interested in dating him no matter how many pride parades or Game of Thrones marathons he partakes in. 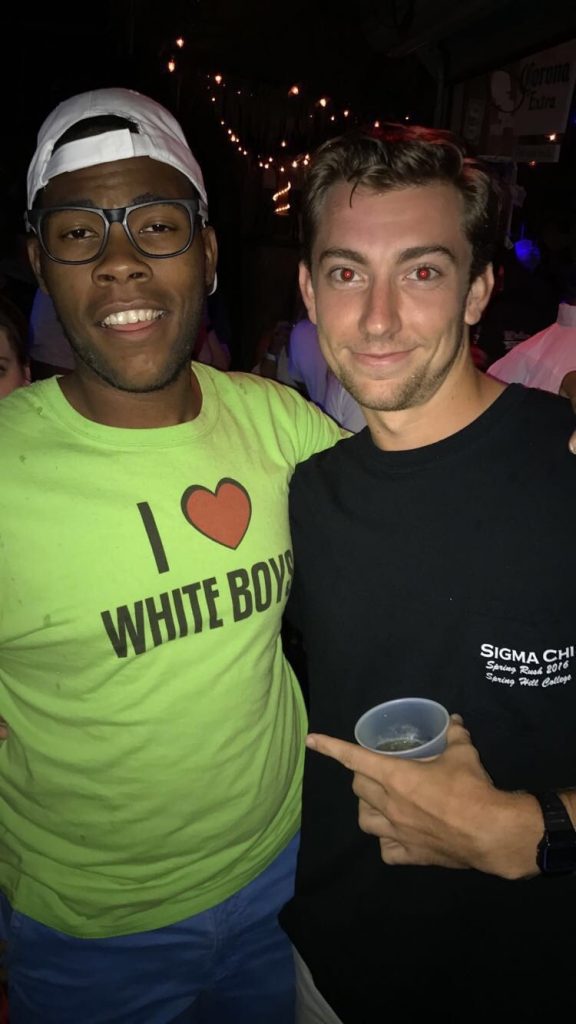 Noir won’t save this poor soul though. Only education and therapy can help him at this point.

Do you have any black gay friends like this or friends who are black or brown that only date white men? Share this on your social media and call them out.

Related Topics:Black Gay MenLGBT
Up Next

Gather Your Good Judys & Trade! A New Dating App for Gay People of Color is Here!